I have great news for young science fiction lovers. The first three Colonial Scouts books (Alien Worlds, Alien Jungle, and Alien Seas) are now in one eBook titled Alien Beginnings. You can get it at your favorite online bookstore.

Or if you prefer print books, as so many teens do, you can get the books separately at Amazon. And don’t think you have to read them in order. They’re good on their own.

The Colonial Scouts are an elite group of explorers who seek out habitable planets for the Colonial Expansion Board. They travel through space via programmable wormholes.

Alien Worlds: Impani, a brilliant girl with a dark past, dreams of escaping the streets by becoming a Scout. Because she is homeless, she feels she must study twice as hard to get

into the program. The day before her final exam, however, a transporter malfunction sends her jumping uncontrollably from planet to planet. Although the error could be corrected from inside the wormhole, the Board decides she is too young to understand that level of tech.

Will she prove them wrong? Or will she die on an alien world?

Alien Worlds is available in print and eBook at Amazon.

It’s also available, and this is really exciting, as an audiobook at Audible. Pretty cool.

You can listen to a sample here.

Alien Jungle: This one is my favorite. Trace, a new Scout, wants desperately to prove himself to both the Board and to his girlfriend (who is Impani, by the way.) But when he leads a rescue party to a failing colony, everything goes against him.

His estranged father turns out to be the leader of the settlement. The colonists think he is inept because he is a teenager. And his disgruntled teammates believe he was named team leader because of his dad. He can tell no one about his secret mission to save only fifteen of the seventy people.

Will he follow orders and leave the colonists to die? Or will he find a way to save them all?

Alien Jungle is available in print or eBook at Amazon.

The audiobook is in production now. I hope to have it out at Christmastime, 2016.

Alien Seas: Natica is drowning in siblings. She hopes that if she becomes a Scout, she will rise above her brothers and sisters and shine. But when a man dies because of her mistake, she leaves the program and returns home a failure. 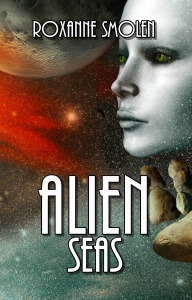 Her homecoming is even worse than she imagined. Her twin brother is missing. Despite warnings from the authorities, she searches for him and embroils herself in a growing mystery with far-reaching consequences.

Will she save her brother from himself? Or will he save her?

Alien Seas is available in print or eBook at Amazon.

The audiobook should be out early 2017.

So there you have it. The Colonial Scout Series. If you love science fiction adventures on distant planets, you’ll love these books!